That Time I Got a Weave Hair Extensions in Newcastle NSW 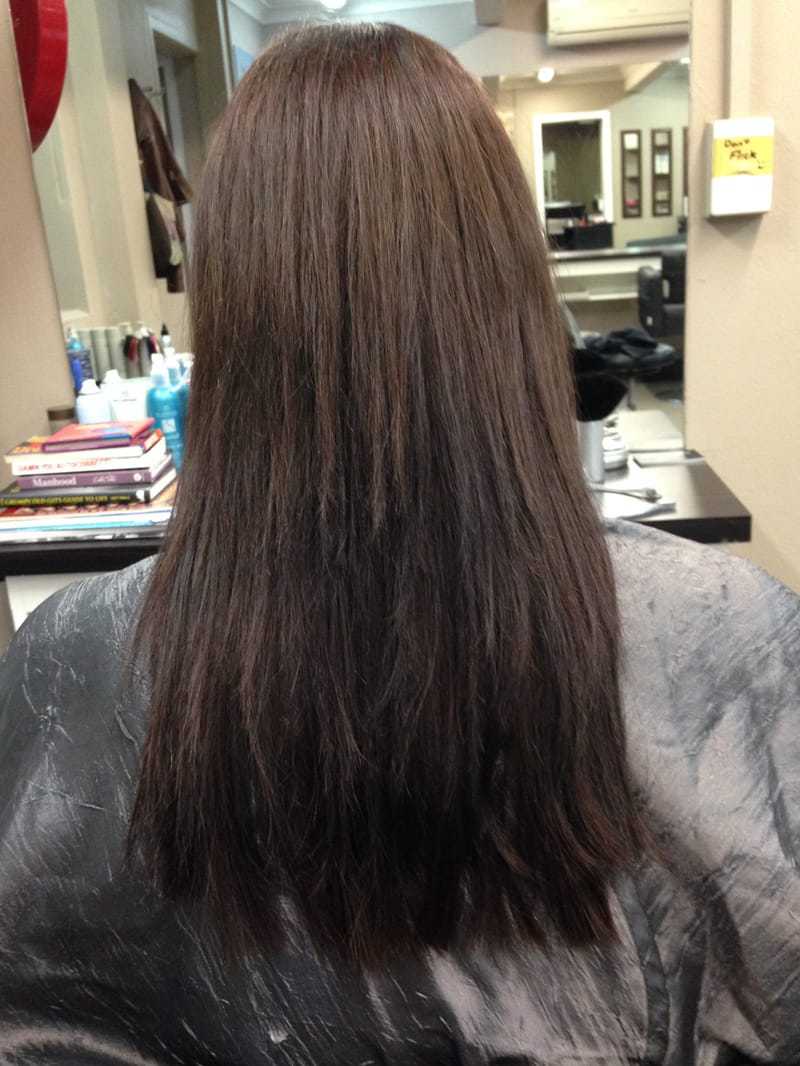 I have been meaning to do this post for ages but you know life…so busy!

Where to get a Weave Extension in Newcastle, NSW

So I went to a local salon in Newcastle (Charles Nicholas in Charlestown) and the lady doing the extensions has been doing them a few years. I liked her and I also liked the way she fixed up my fringe which had been butchered by another hairdresser. The hairdresser told me she had pioneered this method of weave hair extensions in Australia and that not many salons offered it. I ended up getting 2 rows and it cost me $350.

I only wanted a half head of hair extensions because I didn’t want the weight of a full head at the time and sometimes I like a bit of bulk at the back of my head because my own hair is naturally thin and wispy. So, I was hoping for a bit of bulk and perhaps an extra inch or so length.

The weave hair extensions are sewn into a small corn roll which is done very tightly in the position where the hair extension row will be placed. As you can see by the photo below, the corn row was very small and neat and more importantly, it was discreet. I had already washed my hair prior to going to the salon so it wasn’t necessary to wash it again. I assume that if you haven’t washed your hair in a while then she may do it in the salon, however I can’t be sure and it’s always best to check.

Weave Hair Extensions before and After photos.

The next two images are the before and after photos of the weave hair extensions. You can see the first photo shows the corn roll or plait before the hair was sewn onto it. The second photo under that shows the weft of hair after it was sewn onto the plait.

So the installation of the weave (I also think some people call it a weft) took less than an hour. As you can see she separated my hair to do the corn roll plait or braid. She then sewed two pieces of hair extensions on either side of the braid or corn roll.

Once the extensions were in they were very light and easy to care for. The first few days it was a bit hard to get used to the tight plaits, but after a few days they loosened a bit. The hairdresser advised that after the first wash the hair will drop up to 1cm, however I had no such drop. Mine stayed nice and tight until about the third wash, at which point it loosened only slightly and nowhere near 1cm. In fact, my braid or corn roll plait stayed nice and tight for about 5 weeks.

As I have mentioned before, my hair grows super-fast and it is my opinion that my hair grew out and it wasn’t the plait that gave way. All in all, I had my weave hair extensions in for about 3 months which I was very pleased with. You can reuse the hair (which is normal with many types of hair extensions) and the hairdresser told me once you have worn them as a weave once or twice, you can then convert them to tapes, however I can’t vouch for that as I used them only once.

Caring for your weave hair extensions

OK so I was given the usual spiel about which shampoos to use and which ones not to use with this weave, but I was very slack and didn’t follow those directions at all. I am not suggesting anybody ignore your hairdressers care instructions, I am just saying I didn’t take much notice.

I was using the My Organics shampoo in the black bottle which I bought from Chemist Warehouse. It’s about $15 a bottle and the reason I used this is because I already had the stuff and it was nearly full and I didn’t feel like forking out for special (and expensive) hair shampoo and conditioner after paying $350 for a small weave.

What Did I Think of the Hair Weave?

So my thoughts on this type of weave are generally good. It was nice hair, it was discreet and again no glue so less damage on my own hair. That said, there were a couple of concerns I had with this product and the first one was how much it itches. Sometimes the itch was so bad I could barely stand it. Scratching my head like I had nits or something. Upon inspection, I noticed it was thousands of tiny hairs at the top of the weave which were spiky and the way the weave was sewn into my hair, these short, spiky pieces of hair were sticking into my head constantly.

I came up with a solution which I could only do inside the house and for sleeping. I did a ponytail with the weave and all the hair above it pulled up, and left the hair below the weave free. This meant that the small spiky strands of hair were pointing away from my scalp and didn’t itch. Of course, this ponytail is not good for wearing anywhere but inside the house, so I had to grin and bear it when I wasn’t home. To say it was very uncomfortable and irritating is an understatement and my scalp ended up red and irritated from constant scratching.

I have included a photo of the actual hair that was used for my weave so you know what I mean. Notice the very top is a bit thicker? That’s where these pesky little short hairs ended.

I was also a little disappointed with the thickness of the pieces or wefts of hair. As you can see by the photos they were very thin. The picture above shows the two wefts. She had showed them to me prior to installing them, but I suspect some hair had fallen out because when I had them taken out, they looked much thinner. When she installed them, she simply folded them in half, so it’s really one piece, folded over to make 2.

When it came to how they enhanced my natural hair with thickness, the impact was not noticeable.

My ponytail was a bit thicker than normal but realistically compared to the bulk tapes give you, they are better value for money. This type of weave would be great for somebody who just wanted a little bit of length and already had thin hair. If you are looking for more than that, I suggest you will need to get several more rows. Possibly at least another 2 or 3 rows. The price of this would likely be quite high, but as I only got the 2 rows, I don’t know how much a full head would be.

To get the hair extensions taken out and moved up was going to be an additional $90 (don’t quote me on this, I am going by memory). I didn’t make it that far. I went for a haircut at Cherie’s Hair Art on Hunter St and the hairdresser here thankfully cut it out for me. It took about 5 minutes for her to snip the little pieces of cotton and the hair came right out. There were a few little dreadlocks from where my hair had grown out, but a minute or two of brushing got these right out. I liked this little salon and intend to go back for some balayage.

I have decided not to have a weave again. I am glad I did it because I wanted to try all the different types of hair extensions, but this one wasn’t good for me. As I mentioned I only got two rows (which was one long row folded over) and the results may vary with more rows, however the hair was thin and the difference in my hair thickness after the weave was not that much.

I hope you have found this blog post helpful, I would love to hear your comments so feel free to leave me one.

I use a lot of quality products on my hair and have tried many brands. This is a review of the products I have personally tried on my hair extensions.